You Don’t Have to Manage Pain Like a Pro

Pro athletes deal with pain management on a whole different level, but you can still learn from their example (even if you shouldn't always follow it)

Sports fans of a certain age no doubt remember the iconic Nike cross-training campaign from the late 80s/early 90s featuring pro sport double threat Bo Jackson. The “Bo Knows” commercials played off of the two-sport star’s versatility by claiming that, in addition to baseball and football, Bo “knew” everything from tennis to cycling.

Something else Bo and all pro athletes know better than anyone else…is pain (but you can probably see why they’d leave that part out).

That’s not to say we all haven’t experienced pain – and maybe have turned to  Flexpower Warm  or  Flexpower Soothe  to treat it – but professional athletes have a relationship with pain that is far different than the home fitness enthusiast or the weekend warrior. And while none of us should push ourselves the way a pro does, there are some key lessons about pain management we can learn from high-performance athletes and those trained specifically to keep them in the game.

“I would say high level athletes are a little bit more in tune with how to communicate their pain,” says  physical therapist Dr. Jason Pinili , who counts a number of professional athletes across a variety of sports as clients.  “You have some that struggle – particularly rookies or younger athletes – who don’t have that experience yet with rehab and recovery and treatment.”

The hardest part, Pinili explains, is getting people to realize that a major part of pain management is knowing not just where it hurts, but how specifically it hurts. “It’s about trying to educate people when they’re experiencing symptoms,” he says. “When they express what symptoms they’re having – is it really what they’re trying to communicate? For example, if they say something hurts – does it hurt? Or is it sore? Or is it a discomfort versus a pain?”

The first step is to define your terms. Understanding the difference between soreness and discomfort, and understanding context, duration, and other factors that can separate something you can “play through” from something that is potentially more damaging or long-lasting.

Soreness is Not Pain 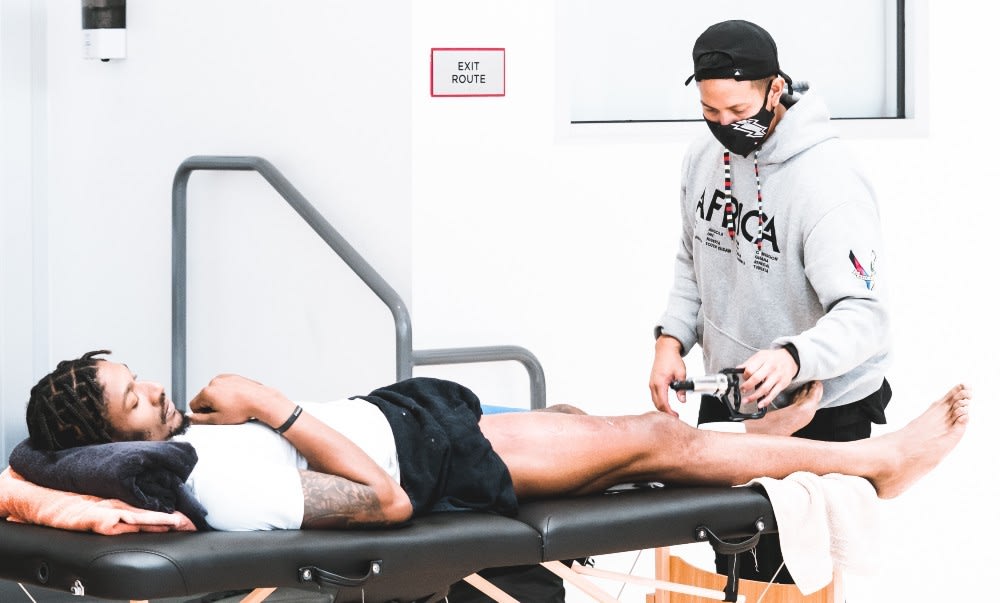 People tend to use terms interchangeably, and most of the time the differences are semantic. But when it comes to pain management, however, you have to be as specific as possible in order to know which treatment path will be most effective. “Part of my job is trying to educate people on what should be appropriate and what isn’t,” says Pinili. “And what amount of pain do you need to be pushing through versus OK – this is too dangerous for your wellbeing.”

In addition to truly understanding these differences, Pinili points out that there are other potential red flags to consider, such as prolonged numbness or tingling in addition to the pain, which might be an indicator of nerve damage and should be looked at by a physician.

Forget “No Pain, No Gain” 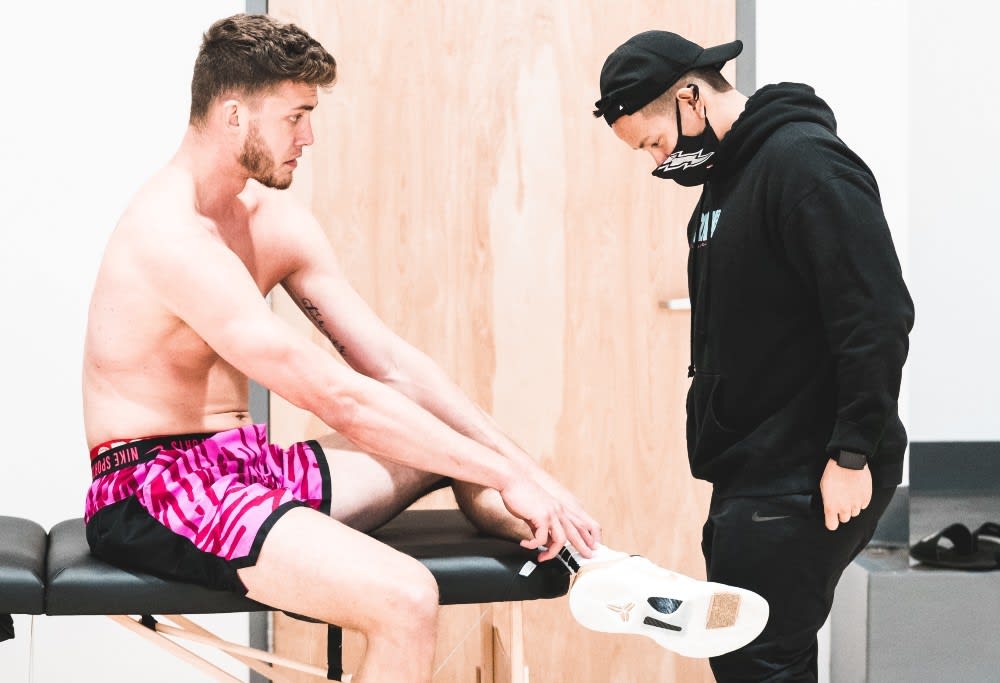 You Don’t Have to Manage Pain Like a Pro

It’s catchy, it rhymes, and it’s been synonymous with fitness since the dawn of Muscle Beach. It’s also something you should probably forget about.

“If there is pain with activity,” says Pinili, “We need to reassess what we’re working out for.”

Again, it comes down to understanding what is happening with your body when you experience pain or soreness, and so you’ll know when gritting through it is beneficial and when it has the potential to do long-lasting harm. Pinili likes to use a 0-10 scale where, as he puts it, “0 is no pain, and 10 is ‘call 911’.” When you’re able to mentally calculate this scale, it’ll help you make better decisions when it comes to the amount of pain you can – and should – be tolerating.

As Pinili explains: “Say you have patella tendinitis in your knee. There’s a certain level of pain I’m comfortable with for people while we’re working together. At the end of the day there are certain circumstances where you need to push through the pain – because what we’re doing is strengthening the tendon. If you’re performing your exercise, your maximum should be 3 out of 10 pain.  Anything over that, we need to either decrease the intensity or switch the exercise. When you get to 4-5 level pain, all you’re doing – for lack of a better word – is pissing your body off. Your knee will lock up in response. If the pain is lower, your body won’t feel the need to lock up and be in a protective state, and you’ll move easier.”

The other problem with the “no pain, no gain” mentality is it that it ignores the fact that pain is subjective. The cliché that “pain is weakness leaving the body” doesn’t really stop to consider “what is the definition of ‘pain’ in this scenario?” Pinili recommends not treating any symptom like something you have to battle through, but instead something to be carefully and considered and, when necessary, dealt with appropriately.

“If you’re actually competing the pain may be something you can push through,” he says. “But if you’re just an average person looking to stay fit, there’s no reason to push through sharp symptoms. You’re not being paid to be an athlete. If the sharp pain that is repetitive every time you do an activity, that’s where I would say, ‘OK, it’s not worth performing that activity.’ If you have some pain before an activity and it goes away when you warm up, it’s OK. Or if you are doing an activity and don’t feel any symptoms but then afterwards you feel the symptom, but then it goes away…I would consider that to mean maybe you pushed too hard during that activity and now your body is broken down a little bit more than you would have liked.”

“If you’re having the pain before, during, and after, however, that’s where I’d have to say, OK, we need to see what’s going on.”

So the next time you marvel at a pro who is able to recover quickly or fight through injury to make a big play, the takeaway shouldn’t be that you shouldn’t ever pain slow you down. It should be an appreciation of the fact that they know their bodies so well – and their own individual pain thresholds – that they understand when too much is too much, and how to communicate their pain effectively when treatment is needed.